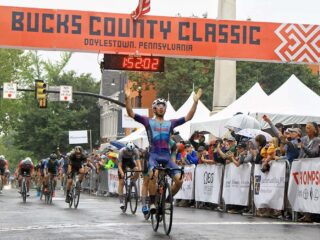 DOYLESTOWN, Pa. (Sept. 11, 2022) - After a summer of drought and heat, racers and fans soaked in a finale to the professional American criterium circuit at the Bucks County Classic. Katia Martinez (CWA Racing presented by Trek) of Mexico soloed to victory in the Doylestown Health Pro Women’s race, while Scott McGill (Wildlife Generation) powered through the wheels on the uphill finish to win the Thompson Pro Men’s Race.

“This is our favorite race on the calendar and we came to win it,” said Dennis Ramirez, team director for CWA Racing, which fielded a full squad and chose to focus on this single day instead of doubling up with other events as many others did. Their fresh legs showed, with CWA firing rider after rider off the front on the wet course.

Racing in cool, wet conditions on a course with eight turns and 90 feet of elevation per lap, the tactic shaved the field by 50 percent during the course of the 25-mile contest. But the tactics had risks as CWA’s top riders, including the 2021 Bucks County champion Paola Munoz, were shelled. But Martinez’ attack late in the race managed to stick. She finished with a 15-second advantage over Samantha Schneider (L39ion of Los Angeles), who out sprinted CWA’s defender Daniely Garcia for second.

The pro men were treated to drier conditions to start their 50-mile contest. But the weather quickly changed and the technical off camber course – notably a downhill second turn, caused complicated race situations and gaps opened up accordingly. Despite a contest twice as long as most American criteriums the competition was no less aggressive with numerous riders trying to force a selection lap after lap.

At 10 laps to go a group of 10 riders filtered off the front and nearly broke free only to fizzle under their own weight. That surge sent many riders to the lockers.

With three to go, all buckled in for a brutal bunch sprint, the L39ion train consisting of Ty Magner, Alec Cohen, Tyler Williams and Eder Frayre – took the front for a leadout. But gauging the 350-meter uphill finish proved challenging. Noah Granigan of Wildlife Generation, fired off the L39ion train with teammate Scott McGill, a world class sprinter, glued to his wheel. McGill crossed the line in a commanding victory.

“Noah’s leadout was incredible,” McGill said. “All I had to do was come off his wheel.” Which he did, with Danny Summerhill of Best Buddies and Australia’s Ethan Craine of Project Echelon scooping up the final podium positions in that order.